The job came through as an Female. Overdose / poisoning, the location, an old cemetery out back of the mortuary. No-one gets buried there anymore. They’ve let it grow wild, so now it’s a kind of city nature reserve. A popular spot for foxes, badgers, drinkers, drama students. Bats, probably. I’ve not been there at night, so this much was new, at least.
‘Great’ said Rae, swinging the ambulance out of the station. She patted her shirt front. ‘Shit! I’m not wearing my crucifix.’
‘Don’t worry. You still smell of garlic from that sandwich.’
‘Thanks.’

Control assured us the police were attending, too, but as we pulled up outside the cemetery gates there was no sign of them. Just a guy, pacing about like he didn’t want to be there. When he saw us he waved his phone in the air.
‘What’s going on?’ said Rae, winding her window down. ‘Did you call?’
The guy nodded, and then glanced over his shoulder.
‘I can’t tell you much’ he said. ‘I was walking past and this girl – she stopped me. She said she needed help. She said there was someone in the cemetery who’d taken an overdose.’
‘Where is she now?’
‘I don’t know. She disappeared back inside by the time I’d finished the call. Look – do you mind if I go now? I can’t tell you anything else. I can’t even tell you if it’s real or not. But I’m freezing cold and I just want my bed, d’you know what I mean?’
‘That’s fine. Thanks for your help.’
‘I’m sorry I didn’t go and look myself. I just…you know. It’s different on your own. And the girl freaked me out a bit.’
‘Don’t worry. That’s fine.’
He tried to smile, then with one last glance over his shoulder, he walked on.

‘What do you reckon?’ said Rae. She put on the scene light.
A pattern of barred shadows immediately thrown back onto the trees and stones nearest the gate, the rest of the cemetery massing darkly beyond.
‘I don’t know about this,’ I said, yawning. ‘Depends if you want an adventure or not.’
‘Not!’ said Rae, folding her arms.
Suddenly I noticed there was a young girl standing right by the window.
‘Shit!’
Rae took a breath, turned in her seat, and cautiously wound the window down.
‘All right?’ she said. ‘Are you the erm... are you the patient?’
I thought she was a student. In fancy dress. To be honest I didn’t think much of her costume. I guessed she was supposed to be a zombie chambermaid or something, the frills of her sleeves shirt torn and dirty, her bodice unlaced, her face inexpertly made-up with chalk-white powder, black kohl, her hair matted with gel.
‘Good party, was it?’ said Rae, affecting an ease I knew she didn’t have.
The girl frowned.
Whether it was the late hour, alcohol, or the fact she was still trying to stay in character – whatever the reason, there was a strangely dislocated air about the girl, a little sad, like someone who’d been out so long they’d given up all hope of getting back.
‘I will take you,’ she said.
Police or no police, there was nothing else to be done.
Anyway, the girl was so frail I thought we’d be all right. And if there were other people waiting for us in the cemetery – well, we’d just have to run. Hopefully the police would be appearing at that point.
I grabbed a torch, Rae the response bag out of the back, and after locking the truck up, we followed the girl through the cemetery gate.

I remember that walk so clearly, even though it was years ago.
The girl just in front of me, Rae just behind, the three of us in a line, walking through the cemetery.
The clouds that had kept the night so dark had thinned, and even though the moon was still only half full, it suddenly seemed very low and sharp and bright, like a blazing sickle, casting a waxy gleam on the thickets of ivy that obscured the graves all around us. I was conscious of the noise of our boots on the gravel path; the sound of our breath, misting in the freezing air. It felt to me as if the entire graveyard was trembling beneath the hush, and our progress was being scrutinised in the darkness by a thousand tiny eyes and feelers. I kept the beam of my torch down – why, I’m not sure – illuminating only the path immediately in front of me, and the pleated hem of the strange girl’s skirt as it moved noiselessly in and out, in and out of the light.
‘What’s your relation to the patient?’ I asked the girl after a while, as much to break the silence as anything else.
She didn’t answer, but carried on walking as before, her arms folded across her chest.
‘We were told it’s an overdose. Do you know what she’s taken?’
The girl stopped suddenly. I almost ran into her. When I raised the torch, I found she was pointing off to the side.
‘Laudanum, I would think,’ she said.
‘Laudanum?’
I played the torch in the direction of her hand, illuminating the figure of a girl lying at the foot of a great stone angel, whose outstretched hand mirrored that of the girl who’d led us there.
Rae and I set to work, establishing that the girl was breathing and conscious. Rae found a few blister packs of medication along with an empty bottle of wine. Luckily it wasn’t a drug that was particularly dangerous, but still the girl was ice-cold to the touch, and we knew we had to act fast. I balanced my torch on a nearby gravestone, then together we sat her up. Rae draped a blanket over her shoulders whilst I unwrapped a silver foil blanket from the response bag and added that, too. The girl – who Rae established was called Jenny – stood up with us either side. I retrieved the torch from the gravestone, picked up the response bag, but when I turned round to thank the girl who’d led us there, I found we were alone.
‘Where’d she go?’ I asked Rae, playing the torch around us.
‘I don’t know. I had my back turned.’
‘Who was that girl?’ I said to Jenny as we started walking slowly back along the path.
‘W-w-hat g-g-irl?’ she said, then started shivering so much it was impossible to understand anything more.
It was a slow walk back to the ambulance. With every step I expected to see the girl who’d led us in. At one point we had to stop for a moment to reposition the blankets and take a better grip. It was then we heard a sudden, piercing shriek from back the way we’d come. I almost dropped the torch in my haste to shine it in that direction.
‘A vixen,’ said Rae. ‘Do you think? A vixen?’
‘Yeah?’
‘Yeah. I think so. A vixen.’
We started walking again. More quickly.

Never have I been so pleased to see a streetlamp. It was so warm and orange and – I don’t know – so normal. It grew brighter as we came on, shining beyond the cemetery gates like a beacon of humanity on the edge of the habitable world. I felt better and stronger the nearer we got; I knew that Rae felt the same way, too.
When we unlocked the vehicle and helped Jenny on-board, I was shivering so much I thought I’d never be warm.
‘Put the heater on, can you?’ I asked Rae, as she went into the cab to turn the engine over. ‘And anything else you can think of.’

The police eventually showed up, just as we were finishing our observations in the back.
‘All right?’ said one of the officers, smiling in at the side door.
‘Good, thanks,’ I said to him, writing down the figures. ‘I’ll be even better come six thirty.’
The officer laughed.
‘I know what you mean,’ he said. ‘Nights, eh? I’m sure we’re being punished for something. Anyway. With any luck, this one’ll finish you off.’
And with that, he slammed the door shut, rapped twice on the side, and was gone. 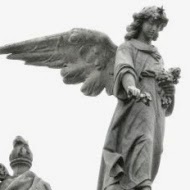 Posted by Spence Kennedy at 7:12 pm

Well,I hope it was a story,otherwise you may need an appointment with someone and a little time off!!

Have fun tonight with your girls.

Thanks, Jack. The girls have some great costumes lined up. Martha's Queen of the Night; Jess is working on an old wedding dress she found in a charity shop. I'm already terrified.

Actually, it's a been a week for dressing up. I took them to Comic Con last Sunday. Martha went as Leela (Futurama) & Jess as Princess Bubblegum (Adventure Time). I didn't dress up, but if we go next year I'm very tempted. Maybe Hellboy...

MMMWHA HA HA HA ...nothing like a good chiller for Halloween...

I knew I liked you, Spence! Hellboy's my favorite.

Read your book (bought it for my e-reader) - great read. Keep the stories coming.

Thanks very much, Anon!
Yep - great films. Keep meaning to find copies of the original graphic novel. It'd probably be a good character to go to Comic Con as. Bit of orange paint, a big old coat, some horn stubs... :/

Siren Voices is a semi-fictional account of my life as an EMT with an ambulance service in the UK.

Patient confidentiality respected and protected at all times.